The reasons why your broadband sucks in South Africa with slow and expensive Internet are diverse and complex. Here are some of the biggest culprits.

It’s no secret that broadband in South Africa is slower and more expensive than it is in other countries, just as it is no secret that given the choice ANC regime would gladly take the entire industry into state ownership and CONTROL, much like North Korea or any other communist state.

The ANC tried to kill Vodacom and MTN with this desire of the ANC to control telecommunications in South Africa, way back before 1993, when it threatened to revoke the cellular licences granted to Vodacom and MTN as soon as it came to power.

In his book Second is Nothing, former Vodacom and Cell C CEO Alan Knott-Craig said the ANC wanted cellular telecommunications to be a separate, autonomous parastatal service offered by Telkom.

According to a paper by Professor Robert Horowitz entitled South African Telecommunications: History and Prospects, the ANC believed the National Party government was unilaterally restructuring the telecoms industry – “a form of privatization through the back door”.

The ANC also did not support the adoption of the GSM standard, but reportedly preferred the American Mobile Phone Standard (AMPS), and the old Scandinavian analogue system.

Had the ANC won its battle against the GSM standard, it may have set South Africa back many years in the rollout of mobile networks and delivering communications services to citizens.

So today we have many DSL users in South Africa complain about poor or degrading connections.

The reasons for South Africa’s poor Internet services are diverse and complex, but some of the biggest contributors are summarised below.

This means there is a clear conflict of interest, as the government also sets telecommunications regulations policies.

Telkom-only Internet access. In 1996, Telkom tried to convince the South African Telecommunications Regulatory Authority (now part of Icasa) that its state-sanctioned monopoly over voice services should extend to the Internet as well.

Thankfully Telkom’s bid to control the Internet was blocked, with the regulator stating the Internet is an area of competition in terms of the Telecommunications Act.

Telkom-only network infrastructure. The government also stood in the way of infrastructure providers which would compete against Telkom.

Former Minister of Communications Ivy Matsepe-Casaburri announced in 2007 that all cables landing in South Africa must be majority-owned by SA companies.

This would have effectively blocked the Seacom and EASSy cables from landing in SA.

Matsepe-Casaburri also fought a court case against Altech and others, opposing their right to “self-provision” networks.

The High Court ruled in favour of Altech Autopage Cellular. Matsepe-Casaburri applied for an urgent interdict to stop companies from competing against Telkom, but eventually dropped the case.

Telkom also enjoyed a sanctioned exclusivity period from 1996 until 2002.

Telkom’s protected monopoly formed part of the government’s “managed liberalisation” programme which was set to end in 2002 with the launch of additional network operators.

By 2011, Telkom’s copper local loop should have been unbundled and available for other carriers to use.

In the end, only one additional fixed-line network player was licensed (Neotel), and due to licensing delays it launched in 2006 – four years late.

Former director-general of the Department of Communications Lyndall Shope-Mafole admitted in 2005 that the government protected Telkom’s monopoly after the exclusivity period ended.

“Why were we protecting Telkom? [It was] so that we could get big value for it because it was going [public on the stock market]. It had to do with bringing investors into a company that is South African,” she said.

Telkom listed on the New York Stock Exchange and Johannesburg Securities Exchange in 2003.

Local loop unbundling was never implemented and there are questions about how useful it would be now, considering there are a number of independent players rolling out fibre-to-the-home infrastructure in SA’s wealthier suburbs.

Moving away from the government’s failures to pure supply and demand – South Africa doesn’t have the buying power or addressable market to drive cheap, fast Internet such as that enjoyed by more developed economies.

South Africa may be more populous than countries such as Australia and New Zealand, but according to a an Ipsos survey from last year only 34% of the roughly 55 million people in SA have Internet access.

Another reason broadband subscribers experiencing poor performance is that Telkom is in the middle of a major network overhaul.

It is rolling out new fibre-based infrastructure, and is also implementing a dynamic spectrum management system from Assia.

This might have a negative impact on DSL performance in your area, but any such degradation should be temporary.

Complicating matters is that there may also be congestion on the network in your area.

If you are experiencing slow speeds it is not easy to determine what the cause is without an investigation.

Congestion could be because your ISP isn’t managing its bandwidth correctly, or because it doesn’t have sufficient wholesale capacity from Telkom.

ISPs have laid some of the blame with Telkom, saying that its exchanges are overburdened.

Adding to the frustration is the difficulty in getting support when you experience Internet connection problems.

Telkom and MTN both have ongoing labour disputes that have affected their call centres.

Telkom has advised customers to use alternative means to get support, including its website, Twitter, and SMS. 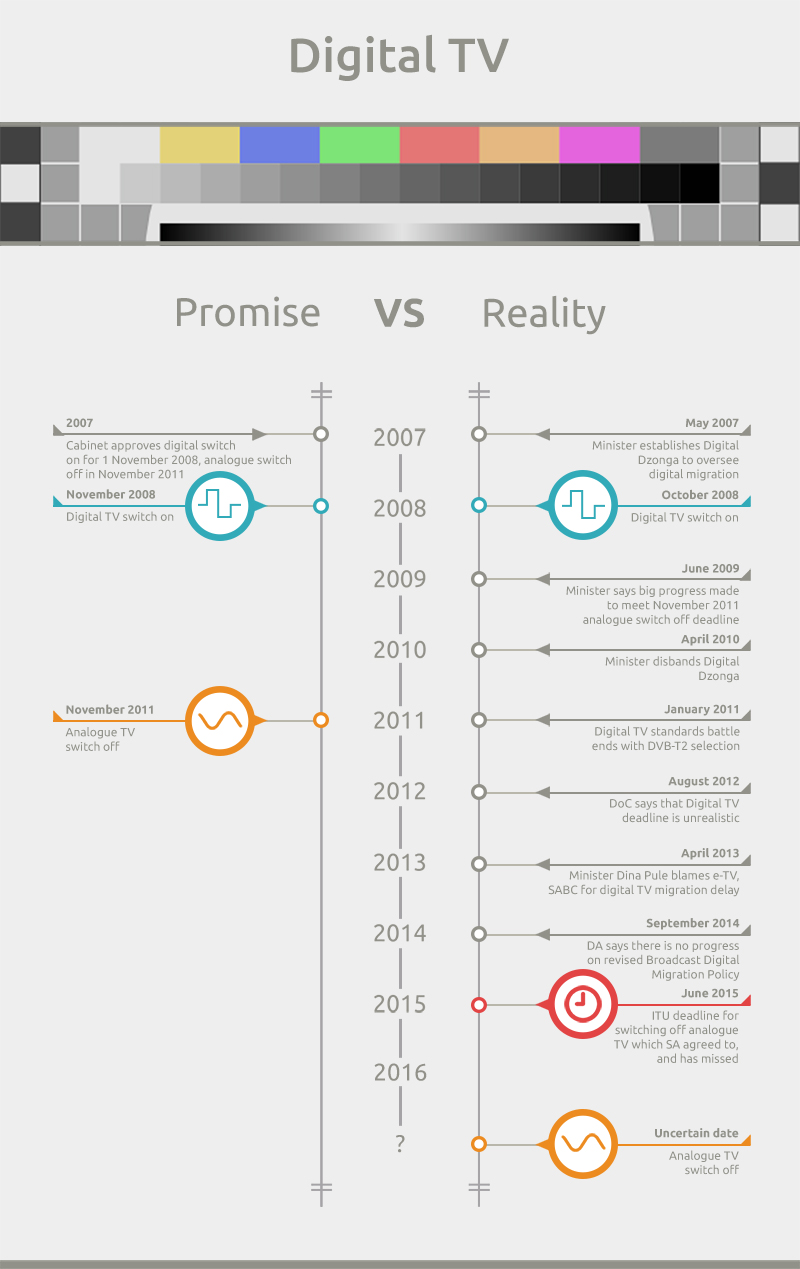 This shouldn’t affect terrestrial TV broadcasts in South Africa, but it is indicative of the opportunity that has been squandered.

The process started in 2002 and was set to finish in 2011, but has been delayed to the extent that it is no longer clear when South Africa’s analogue TV signals will be switched off.

This is holding back the release of the “digital dividend” – a chunk of frequency spectrum that could be used roll out high-speed wireless broadband in less densely populated areas.

The government and Icasa have indicated they would like to assign previous LTE and 4G spectrum along with the digital dividend. 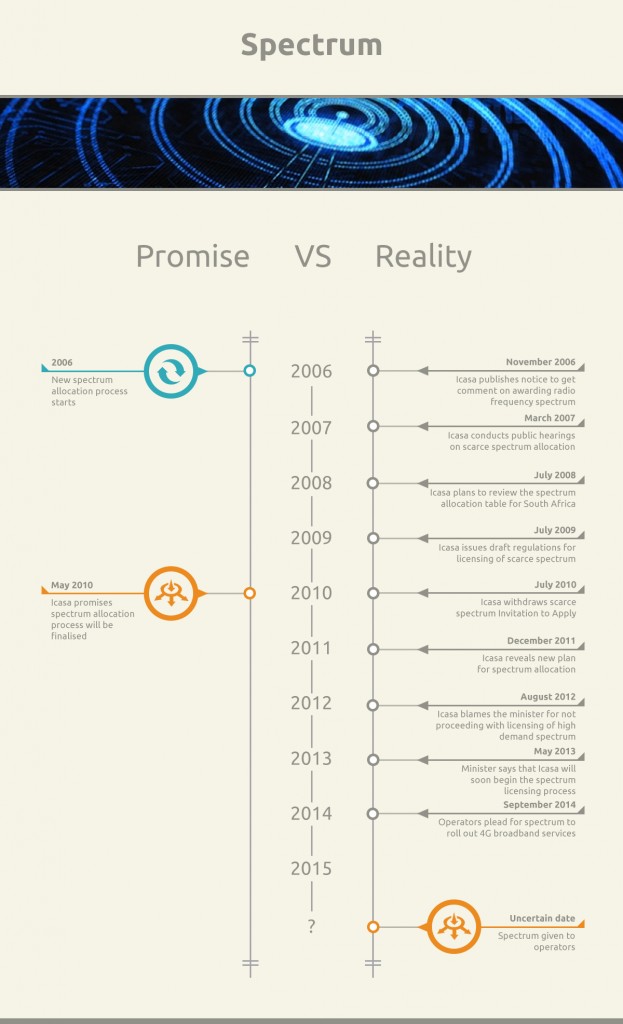 With the assignment of high-demand spectrum in the 2.4GHz band held up by the migration to digital TV, SA’s mobile operators have complained they can’t effectively roll out LTE services.

Despite the lack of spectrum, Vodacom and MTN started rolling out LTE services by “refarming” existing spectrum in the 1.8GHz band.

Telkom has also rolled out LTE and LTE-Advanced on its unused spectrum in the 2.3GHz band, but this frequency has not been widely adopted in smartphones.

With data traffic increasing exponentially, it is clear mobile operators will need as much as spectrum as they can get their hands on.

LTE also offers a number of other improvements over older technologies, which will benefit those who are dependent on mobile broadband for their Internet connection. 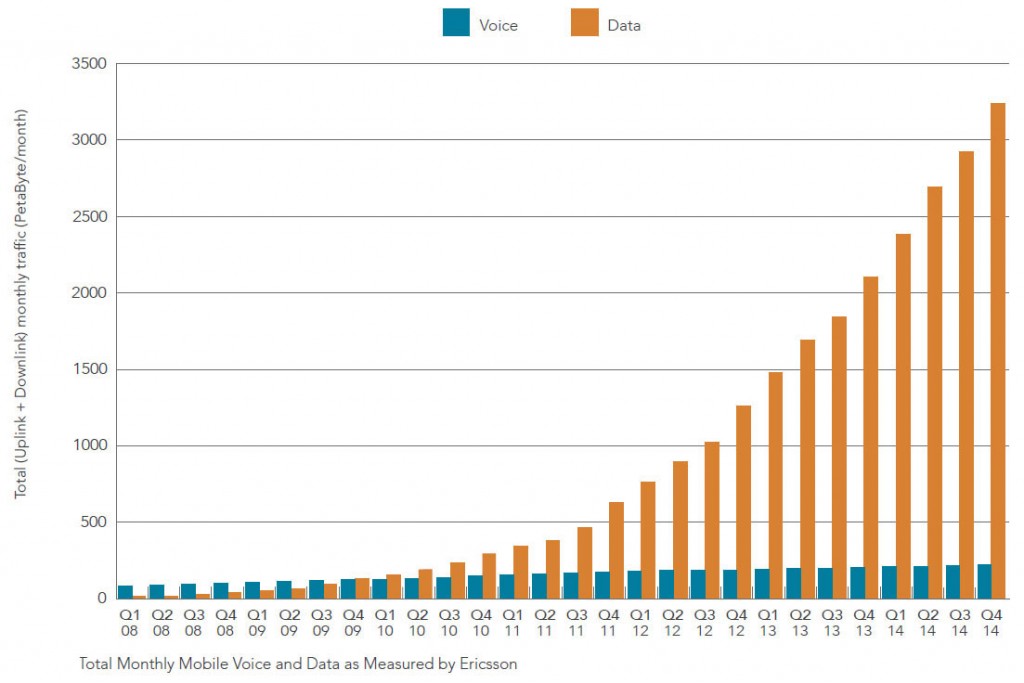 Light at the end of the tunnel?

Given the reasons for South Africa’s poor quality and expensive broadband connections, one can’t help but wonder whether we can look forward to any improvements in the near future.

The Department of Telecommunications and Postal Services is edging closer to finalising a review of South Africa’s information and communications technology policy.

This is expected to include the 800MHz “digital dividend” frequency spectrum currently occupied by terrestrial broadcasters such as the SABC, E-tv, and M-Net.

Although it might sound overly pessimistic, history suggests that precious little of value will come from this latest round of policy review.

What might improve South Africa’s broadband situation is the recent trend where home owner associations put out tenders to get fibre-to-the-home infrastructure rolled out in their neighbourhoods.

These services are often priced to compete against Telkom ADSL and VDSL services, offering an alternative where Telkom’s monopoly on the fixed-line local loop previously seemed unassailable.